Today’s roundup of daily news takes a closer look at the local coverage on the devastating wildfires in the American West. Cities and communities have been burned by the flames, causing many to evacuate to safety. Thick smoke has colored skies a sickly orange and is raising concerns over poor air quality. Read the stories below to find out more about how these fires are impacting communities, curated from Newseum: 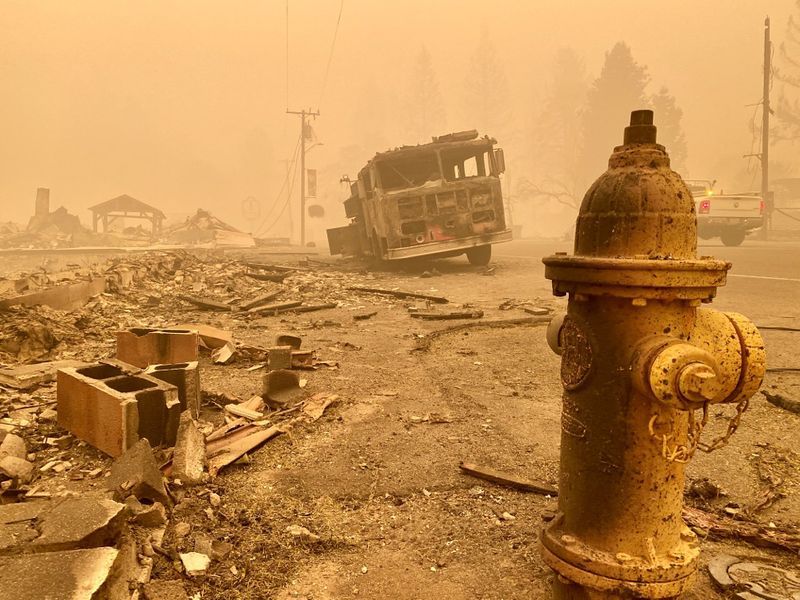 A burned fire truck near Detroit, Oregon east of Salem, taken during the 2020 wildfires. Credit: Oregon Department of Transportation/Flickr/CC BY 2.0

On Friday, California Governor Gavin Newsom signed a law that allows certain prison inmates to work with crews to fight the fires. The law will potentially help the inmates land jobs as first responder firefighters after completing their sentences. The new legislation comes after decades of recruiting inmates to fight wildfires. In the past, the program has been highly criticized by opponents. Inmates are compensated with reduced sentence time or extremely low wages between $2 and $5 a day, plus $1 per hour when they’re working on a fire.

Winds cleared some of the smoke on Friday, however communities in Oregon are still blanketed in unhealthy to hazardous air. Fires in Oregon and Washington are expected to continue burning through the weekend and health officials have extended air quality alerts for the entire state of Oregon through Monday afternoon.

The Record, Published in Stockton, California

The football season has gotten off to an unusual start this year in California, with safety precautions with the pandemic and now the wildfires. San Joaquin County school districts have halted football practices for weeks, and many are now expecting to hold the fall sports season in December and January. The poor air quality has become another obstacle in school athletics this year.

The Olympian, Published in Olympia, Washington

The South Puget Sound is covered in an unsettling haze. Smoke from out-of-state fires has been impacting Western Washington. Air quality levels have reached “very unhealthy” levels in certain regions. Health officials are recommending that those with respiratory conditions wear masks and try to stay indoors.

Cameron Peak Fire evacuees who lost home in High Park Fire: 'We were ready this time'

The Cameron Peak Fire in Northern Colorado grew from 24,000 acres to 102,000 acres in the matter of three days at the beginning of September. Families had to evacuate the area, including Deanna and Joe Skelton who had lived about 30 miles away from the fire. This wasn’t the first time their home was at risk of being consumed by a wildfire: In 2012, their home was burned down in the High Park Fire. Read this profile that follows families as they flee and protect themselves from the flames.