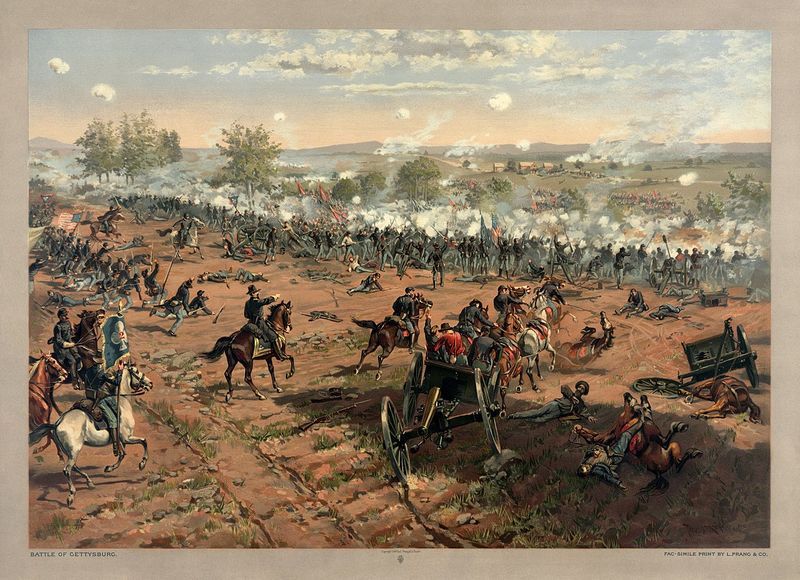 "On the evening of the first our brigade (Gordon's) set out on the York road to see that the enemy did not come upon us in the rear from that direction. Our duties were not very hard after this till we started to leave, when the protection of the rear of the army fell upon our brigade. By the way of Fairfield the enemy charged us at that place and did some damage in the way of wounding and killing. Our company left Lieutenant Charles L. Walker, shot through the thigh, on the field, who, after long suffering, died, and his remains still rest at Gettysburg. So ends the great battle of battles, the dreadful battle of Gettysburg, where, I suppose, the roar of artillery the like of which was never heard before. It is said that at least 260 cannon were engaged on the second afternoon, belching forth death and destruction upon every hand, and for every second some one was hurt. We left our dear comrades buried here on this field ..."

Fought from July 1-3, 1863, the Battle of Gettysburg became a turning point in the American Civil War (April 12, 1861 - April 9, 1865). It was the bloodiest battle, with over 50,000 casualties -- and one that forced Confederate General Robert E. Lee and his army to retreat home to Virginia, not able to invade the North. The third day of battle signaled victory for the Union, despite a loss of some 23,000 soldiers under the command of General George G. Meade for the Army of the Potomac. Though Lee waited for a counterattack on July 4th, it never came, leading him to request resignation from his military post -- a request flatly denied by former Confederate President Jefferson Davis. The Battle of Gettysburg inspired one of the most famous speeches of all time: a short, but powerful 272-word address delivered by President Abraham Lincoln at the dedication of the National Cemetery in Gettysburg, Pennsylvania on November 19th, 1863:

Four score and seven years ago our fathers brought forth on this continent, a new nation, conceived in Liberty, and dedicated to the proposition that all men are created equal.

Now we are engaged in a great civil war, testing whether that nation, or any nation so conceived and so dedicated, can long endure. We are met on a great battle-field of that war. We have come to dedicate a portion of that field, as a final resting place for those who here gave their lives that that nation might live. It is altogether fitting and proper that we should do this.

But, in a larger sense, we can not dedicate -- we can not consecrate -- we can not hallow -- this ground. The brave men, living and dead, who struggled here, have consecrated it, far above our poor power to add or detract. The world will little note, nor long remember what we say here, but it can never forget what they did here. It is for us the living, rather, to be dedicated here to the unfinished work which they who fought here have thus far so nobly advanced. It is rather for us to be here dedicated to the great task remaining before us -- that from these honored dead we take increased devotion to that cause for which they gave the last full measure of devotion -- that we here highly resolve that these dead shall not have died in vain -- that this nation, under God, shall have a new birth of freedom -- and that government of the people, by the people, for the people, shall not perish from the earth.