The word "potluck" comes from communal eating traditions. Whether bringing food to a friend on a visit or pooling resources in hard times, the "luck of the pot" provides nourishment for the body, the soul, and the community. The library is a gathering place for everyone. What better way to share who we are and what we do than with a book buffet curated with the "luck" of our catalog? Whether we're seasoned or still a little green, we library staff members part of the Teachers College melting pot to help you expand your information palate. We hope that the books we've brought to the table will give you a taste of who we are! 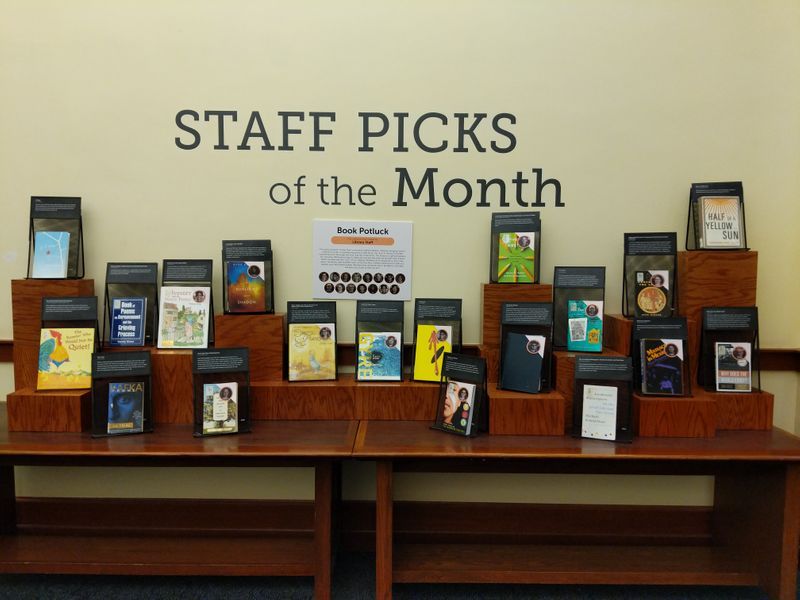 The Marrow Thieves by Cherie Dimaline

In a time where Indigenous voices and the needs of the planet are continuously sidelined, this brutal yet poetic novel rocks the dystopian literature world. Cormac McCarthy's The Road was the book that I was required to read in school but this is the one I wish I'd been asked to read instead.

HBO's series of the same title (a continuation of the story, rather than an adaptation) opens with a graphic depiction of the 1921 Greenwood Massacre and goes on to allude to reparations, a President Robert Redford, and regular transdimensional attacks in which tiny squid fall from the sky. I had no idea what was going on but I was hooked. While less concerned with legacies of racial violence, the source material is still plenty compelling.

Their Eyes were Watching God by Zora Neale Hurston

How did this brilliant novel slip like a sailboat past my journey as a literature/language student, only to recently anchor? Poorly received by the African American community in 1937, Hurston's work became a classic of the Harlem Renaissance and her best-known one. Janie Mae Crawford comes back from burying the dead and teaches us how love, the most powerful force in life, adapts and changes constantly like the sea.

The Accidental Masterpiece: On the Art of Life, and Vice Versa by Michael Kimmelman

The Accidental Masterpiece: On the Art of Life, and Vice Versa is a series of inspiring and beautifully-written essays about art and how it connects to life in the larger world, by the gifted author Michael Kimmelman, architecture critic of the New York Times.

Massacre in Mexico by Elena Poniatowska

Relevant to the current situation in Hong Kong, this book by the esteemed journalist Elena Poniatowska covers the 1968 student protest in Mexico City.

Released last month, TC's own Aaron M. Pallas and Anna Neumann's Convergent Teaching makes the case that American higher education must hold fast to its core mission of fostering learning and growth for all people.

The Power Broker by Robert A. Caro

Perhaps no single person has left a greater mark on the city of New York than Robert Moses. At the height of his power, Caro argues, Moses had more influence than any mayor or governor combined. Yet he was never elected to anything; he had attained his power through the establishment of public authorities of which his control was absolute. Moses - the city-shaper, the master-builder - was to Caro like an artist, with New York as his canvas. But his art came at great cost, evicting half a million people and displacing entire communities.

I picked this book for 2 reasons: 1. I am the author, and 2. you never know who will be moved by these poems. Maybe it will put a fresh look on the mourning process for somebody.

Assata: An Autobiography by Assata Shakur

For anyone interested in the day to day experiences of a radical activist and Black Panther Party member who was targeted for persecution by the FBI, a clear and essential American story.

First and foremost, Fun Home is a story about surviving and overcoming trauma. Intergenerational trauma and abuse hang heavily over Bechdel’s childhood and relationship with her father. Despite everything he did, Bechdel presents her father with empathy for the hidden pain that he sublimated into a cruel perfectionism and abuse. It’s a beautiful, moving, and often funny story about coming out – and the danger of being forced to stay closeted.

In Sunlight and in Shadow by Mark Helprin

Following WWII Harry Copeland returns home to New York and meets his saving grace in Catherine Thomas Hale. Together the pair explore all New York has to offer. Mark Helprin transports readers into the grand museums of Manhattan, the salty beaches of Long Island and the picturesque landscapes of Westchester in this timeless novel of romance, heroism, jealousy, and adventure.

The Trial by Franz Kafka

Kafka, a Jewish German-speaking novelist started to write The Trial in 1914, the start of WWI. The Trial is one of Kafka's most famous works. The story speaks of the countless faceless victims of political and legal injustices. Kafka who struggled with finding his true identity his whole life puts some of his own life experiences into Josef, the protagonist's, life.

Sylvester and the Magic Pebble by William Steig

I received this book as a Christmas gift from my kindergarten teacher. I felt so special because a teacher brought me a book. Reading the book now as a grownup (who has mastered words that begin with the letters t and h) , I realize that for the longest time, I've been mis-remembering how I "read" the book. The illustrations must have helped me to understand the plot and sympathize with young Sylvester Duncan and his parents. Through wishing on a magic pebble, Sylvester turns himself into a rock, but is unable to change back to normal.

"The Plastic Ocean" is a book with great collection of the articles about plastic waste in the oceans which is the major pollutant currently impacts the world ecosystems. The authors of these articles did excellent jobs putting together all detailed information with photographs, statistics and history of plastic pollution in the last century. More importantly, this book can inspire the readers to understand the great impact of plastic trash and how it is being transferred up the food chain to impact human health.

Hilary Knight’s The Owl and the Pussy-cat: Based on the Poem by Edward Lear by Hilary Knight

Of all the many books I ever read to my now-grown children, this is the one I loved most. Otto and Polly, a pair of neighboring children who live in a bleak industrial landscape escape for a day in fantasyland, as they magically transform into the owl and pussycat of Edward Lear's poem. Hilary Knight's illustrations are transporting. One wants the day never to end.

The Rooster Who Would Not Be Quiet! by Carmen Agra Deedy, illustrated by Eugene Yelchin

What happens to a rooster who loves to sing in a town where noise is outlawed? Vibrant illustrations match our feathered protagonist's spirit in this riveting tale of rules that are made to be broken and the triumph of justice. This is a book worth crowing about!

If I Stay by Gayle Forman

Seventen-year-old Mia has some tough decisions to make; stay In Oregon with her boyfriend or move to New York and attend Julliard. However, in a blink of an eye these decisions fade away and in their place Mia is faced with an impossible choice; to live or not.

Half of a Yellow Sun by Chimamanda Ngozi Adiche

This fictionalized account of the war in the former Republic of Biafra is heart-breaking and shows the lasting consequences of war.

Underneath the Lintel: An Impressive Presentation of Lovely Evidences by Glen Berger

"...our man will find a way, this I know, mark my words, to behold this hash of a creation, to take this muck and holy mess of a life, and winnow out and revel in every bit of beauty and worth that's in it so long as he's in it, so there. And so. We Shall Proceed." (I spent a good portion of my time in the aftermath of 9/11 in a theater in Soho watching this play. Long before I worked in a library. It's about a Dutch librarian and I like to imagine Allen in the role.)

Masterpieces in Miniature by Agatha Christie

Agatha Christie remains the best-selling novelist of all time according to the Guinness Book of World Records. Her estate claims that her books are only outsold by Shakespeare and the Bible. This collection highlights shorts from some of her most famous crime-solving heroes; Miss Jane Marple and Hercule Poirot, with lesser-known characters Parker Pyne and Harley Quin (no not that one) in one tantalizing tome. Please be aware that not all of Christie's stories have aged with grace. Fran Lebowitz, an avid fan of Christie's, describes her stories as containing "casual racism and anti-semetism," in addition to which I am often taken out of my enjoyment with persistent themes of misogyny and classism that pervade most fiction from this era, which is no excuse. In the true spirit of a potluck, this offering may leave a bitter after-taste.

Why Does the World Exist? by Jim Holt

This book is subtitled "An Existential Detective Story," which is almost worth the price of the book in itself. Holt describes his encounters with a number of scientists, philosophers, and writers, all of whom have divergent convictions about cosmology and related subjects; the book also includes Holt's recounting of core events in his own life, including the deaths of his dog and of his mother. I've read around extensively in the book, and found it brilliantly written, witty, and profound, and though I haven't read it straight through, I've looked ahead to the ending, and it's pretty satisfying.