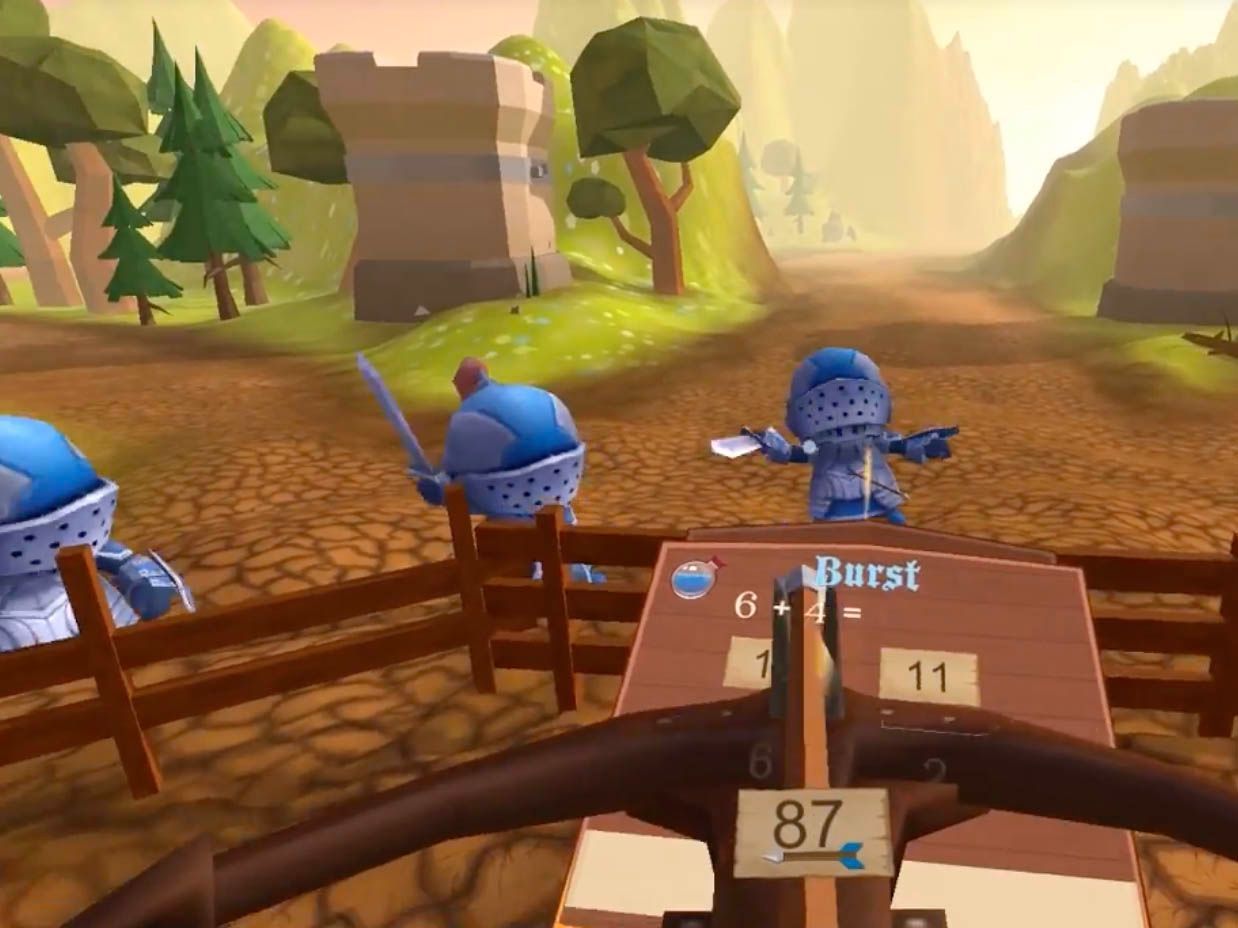 Medieval Math VR is a game in which the player must defend their kingdom from enemy druids by using the power of math. By solving math problems correctly, the player gains more weapons, fends off attacks on their castle, and destroys enemy forces. Medieval Math is free to download on iOS and Android.

This game brings out the addict in me like few other educational games I’ve played. The line between learning and playing is blurred really effectively; the player is required to solve addition, subtraction, multiplication, or division problems in order to get more arrows with which to shoot approaching enemy soldiers (and ogres at higher levels). The urgent necessity of acquiring more arrows as bad guys storm ever closer is great motivation to solve math problems. The more problems correctly solved, the more time the player has to shoot arrows at the enemy.

While the game is simple, the objective is clear, and though speed is important for success, Medieval Math places value on accuracy as well. If the player answers math questions incorrectly, the number of arrows in the player’s reserve is diminished. Each wave of soldiers you fend off gets progressively more difficult, as do the math problems. Because the game involves multitasking, it remains exciting and engaging despite its simplicity.

In the settings of the game, the player has the ability to adjust the types of math problems they encounter in order to focus on certain types of problems, such as fractions, addition, subtraction, multiplication, division, and pre-algebra.

While the concept of Medieval Math VR is quite fun and effective, especially as a free app, the product has a ways to go before it’s up to the reliable standards of big-name learning games. The VR was good but glitchy; the app crashed on me a handful of times and sometimes displayed the wrong types of math problems (such as when I only wanted addition and subtraction problems but fractions were included).

Medieval Math VR is also falsely advertised both on the app store and on their developer’s website as having a dashboard that can display the player’s progress to determine whether or not certain skills and concepts are improving over time. I could not find this feature anywhere on the app, which is highly problematic and disappointing as it would have been a great addition.

While the premise and strategy of Medieval Math VR is fantastic, the execution is not. After a few more iterations to work out glitches, correct math problems, and add features to track player learning, I would be more than happy to recommend this app. As it stands now, however, I cannot.