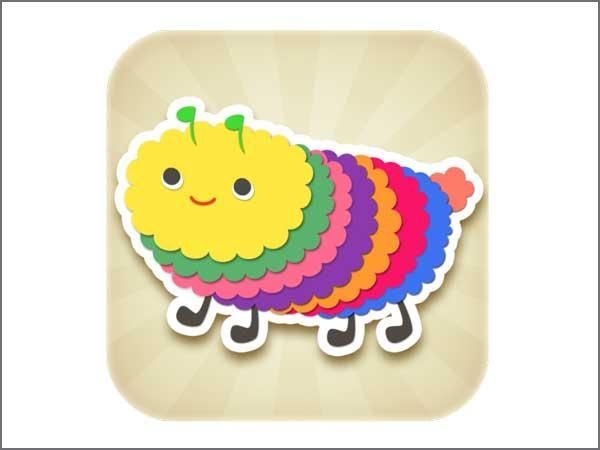 Color Band is an iPad education app aimed at Pre-K students that emphasizes art creation and music learning in an innovative way. The app cleverly utilizes the iPad’s built in camera to let users create music through gesture and blends images with sound for dynamic combinations of art, music, and interaction. Like most good apps for this market, Color Band is largely unstructured with minimal instruction and an intuitive interface that will appeal to short attention spans.

The main canvas play area is a charming and colorful 8-bit environment that uses the iPad camera to reflect a pixilated black and white video of the player back at them as they engage. Users can control their in-game hand through this reflection to interact with the musical elements in a scene. The initial canvas is narrated by Lalabee, a friendly rabbit character who guides users through their first Color Band experience. The controls are easy to master and users can quickly move on to creating their own canvases and making their own instruments.

There is only one primary activity in Color Band, so users may become bored quickly. Short gameplay might be a pro for parents as the app is quite loud and the user created instruments are often inharmonious.

Color Band allows for extremely creative and free musical play. The app takes advantage of the digital space and many interaction possibilities of the iPad to create an extremely novel musical experience. Color Band is unique in that users can easily create and test their own instruments that combine many different sounds including traditional instruments, animal sounds, human voices, and pre-recorded beats for layering. Color Band’s non-traditional strategy will introduce young learners to digital music creation.