Last week Brian Sweeting and I attended the annual conference held by ITHAKA, the company that runs the digital archive JSTOR. Our group convened in the Roosevelt Hotel in Midtown, its lobby decked out with festive, platinum-colored decor and a plump Christmas tree, to discuss the future of higher education.

The day began with YS Chi, Chairman of Elsevier, who spends 300 days a year traveling around the world on business. Elsevier has cornered the market on science publishing, so if a college or university wants to access the latest research, they will need to subscribe. Tensions surrounding Elsevier's power were felt during the Q&A, with pointed references to shrinking budgets and when one audience member introduced himself as an "Elsevier cynic." Even in the humanities, there is barely a handful of competitors in this space, all of which made it easy to imagine a time when students will be able to access every book and article from the comfort of their dorm rooms.

This raises the question of the changing role of the library, which came up more directly in another panel. A librarian in the audience said they've recently been focusing more on services, including wellness initiatives, like pet therapy and massage chairs. Will libraries and community centers be forced to compete over resources? By emphasizing the student experience of individual study and more collaborative group study, as well as other events and services, libraries can remain vital to their communities, even as information becomes increasingly centralized.

Trouble could be seen on the horizon in several panels, especially in two eye-openers with Doug Lederman and Jeffery Selingo. Changing demographics are resulting in reduced enrollment on campus, and reduced revenues, as the Millennials gives way to the smaller Gen Z. That such a decline was entirely foreseeable didn't keep colleges from expanding, in order to attract those students who have just graduated. Such construction projects were often financed through massive loans, passed on in the form of ballooning tuition. The Recession and the student debt crisis have crushed or delayed the plans of many in the largest generation since the years following World War II, but the effects continue even for their successors.

Gen Z, or those born after 1995, grew up watching their parents lose their jobs and homes, and hearing the horror stories of student debt. Moreover, they will be coming from less affluent homes. Smaller in number, more limited in their resources, more cautious and pragmatic in their outlook, Gen Z is wary of higher education and its promises. If colleges can't prove their ROI, it looks like Gen Z may simply opt out. Vocational schools did not come up at the conference, but their affordability and practical focus could make them a good fit for many in Gen Z, and a further draw away from traditional higher education.

According to Doug Lederman, two hundred colleges, or 5% of the American education system, could close over the next ten years. Top- and middle-tier colleges, able to pull students from outside their region, will be protected, while both less exclusive, smaller private colleges and regional state schools will be in danger. The following maps show that the decline in student population will be especially bad in the Midwest and Northeast, while student poverty rates will be worst in the southern half of the country. There aren't many bright spots, but taken together Colorado and a few other states may be comparatively well positioned. The drop-off in student populations will increase in the later 2020s, from the birth decline caused by the Recession. 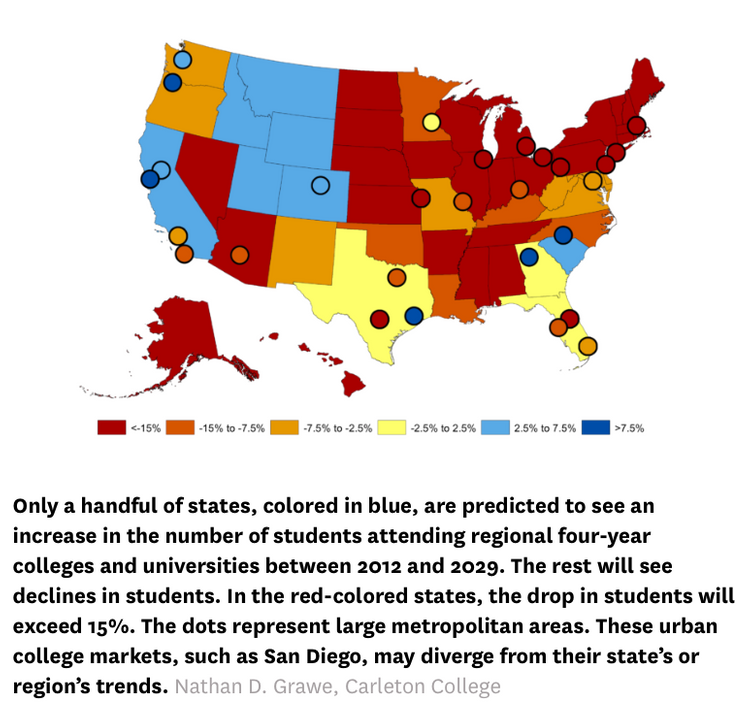 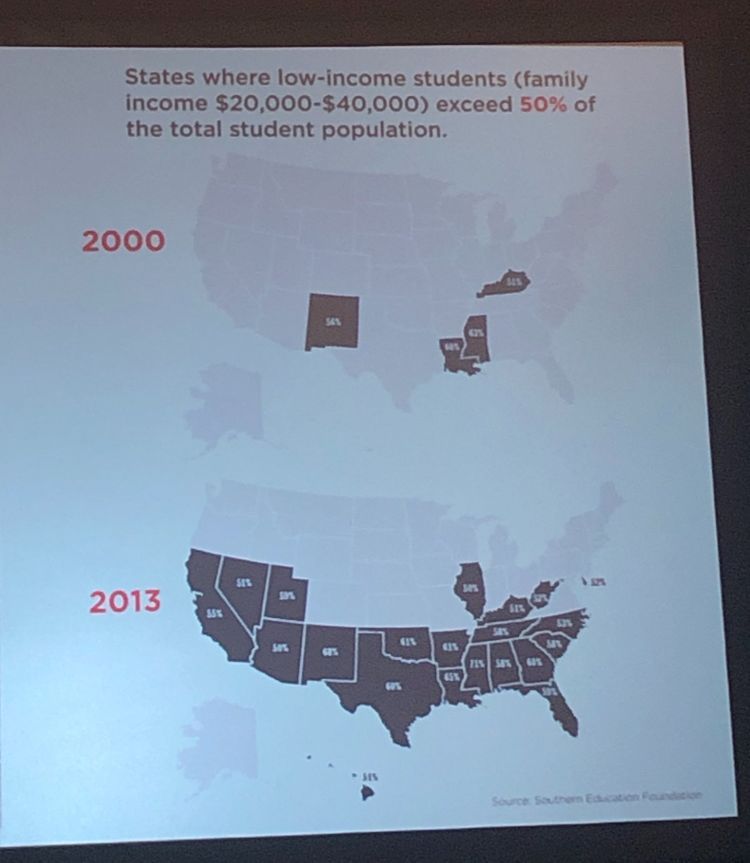 When a student loan is accepted, the federal government issues the money, which goes to the university. A third of the $1.5 trillion in student debt, we learned, will never be recovered. When the public realizes they are on the hook for this $500 billion default, they may insist that universities take on a share of the risk for these student loans. At the same time, the colleges' own massive loans will need to be covered, regardless of what Gen Z decides to do. Those who can't meet, or renegotiate, these payments will themselves default, and be forced to close.

As the conference spilled over to a buffet of hors d'oeuvre, following a day of intriguing panels and speakers, I couldn't help but think, as we chatted by the open bar, sampling artichoke hearts, soppressata, empanadas, and crab cakes, that digital archives seemed to be doing well, while colleges were facing difficult years ahead.