For the past month I embarked on an adventure in the library’s archive and TC’s history to understand better how has Teachers College – and consequently the library – visually represented itself as an entity. More specifically, I was curious about how its visual communication guidelines, insignias and logos have evolved and have been used. In the light of the library’s new website launch, I wondered if there was a clear evolution on how TC and the library have been represented in imagery and if there was a consistency through out its existence.

This brief research brought some interesting points, and would not be possible without Jennifer, with whom I kept a long email thread as we both did a very investigate research work on the library’s archive and memory. It also made me look more carefully towards Teachers College architecture, trying to find physical indications of when its visual communication was established or have changed. For the purpose of this small quest, I decided to exclude the library return date stamps and more universal symbols shared with Columbia University.

If you do know something about TC’s visual identity that is not here or I have misinterpreted please don’t hesitate in commenting or sending me!

So here’s what I found out about Teachers College visual identity:

I started by looking into the history of TC. It actually started in 1880 as the Kitchen–Garden Association, located in the Greenwich Village & founded by eleven women. The Book of Reminiscences and A Brief Sketch of the Early History of Teachers College provided me informations about that moment. The school had this insignia of a K interlaced with a G, and two drawn brooms crossing them, on the back. 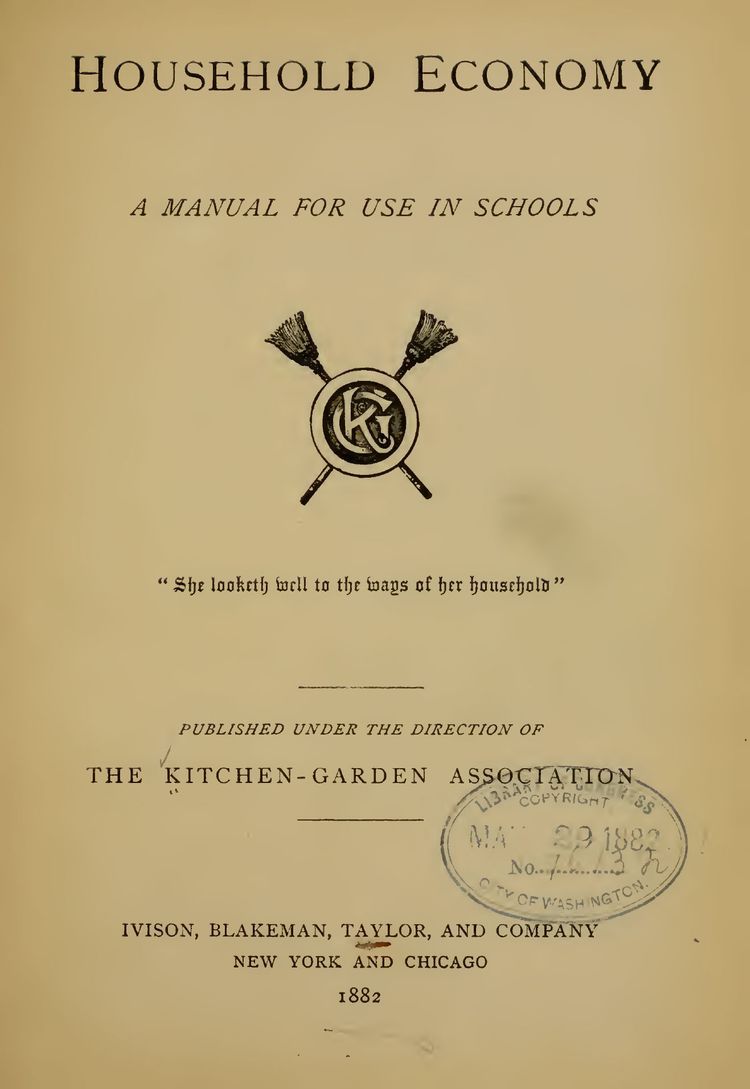 Later in 1884, KGA turned into the Industrial Education Association, to broaden the kind of education and reach the institution could have. Through the documents available, It seemed to have no specific imagery / logo except this capitalized version of it.

As the school scope gotten even more abroad, it got renamed as the Teachers College, as you can see in this picture in front of the headquarters at 9 University Pl. 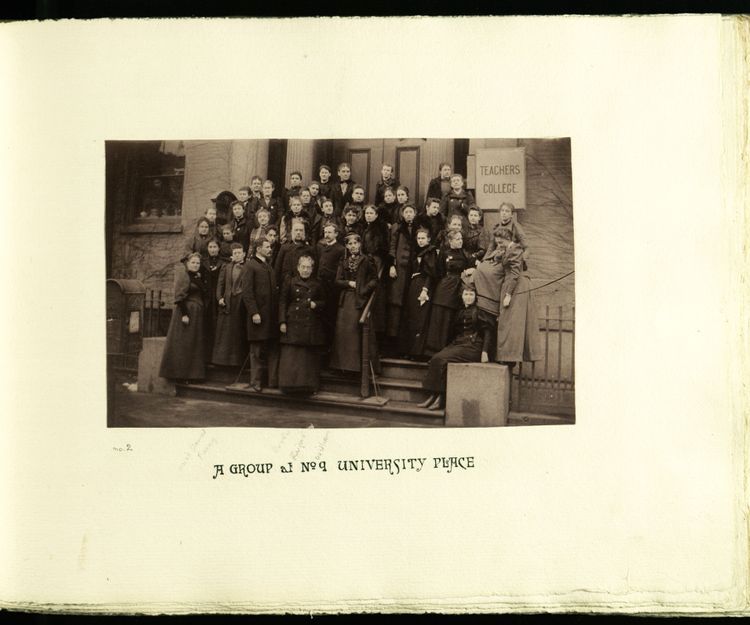 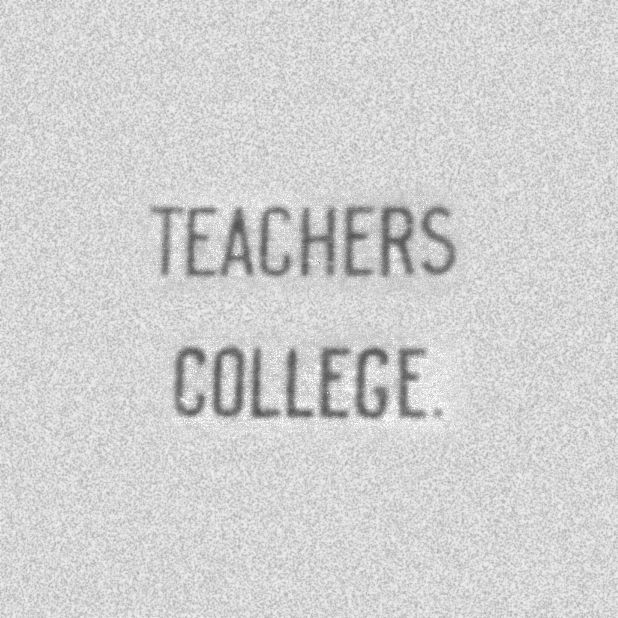 Then, in 1892, it was incorporated by Columbia University. I found on the Book of Reminiscences an Alma Mater embossed insignia, in which is written “Teachers College” / “Incorporate in 1892”. 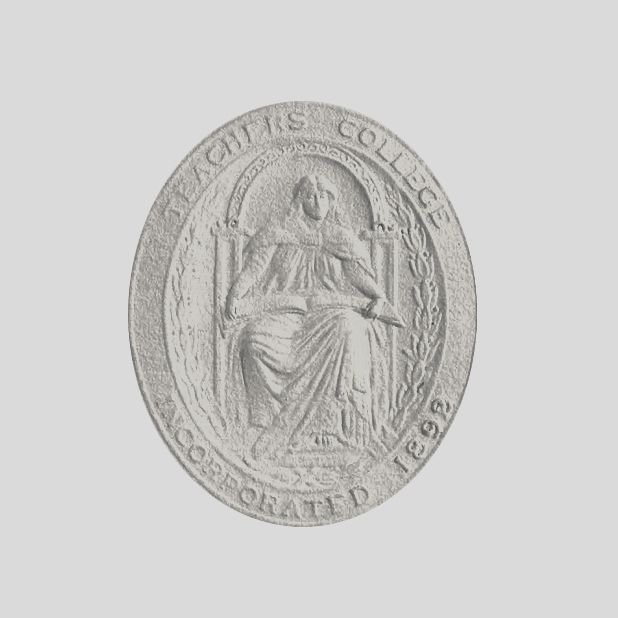 The next version of a graphic representation uses a serif typography (small features on the ends of strokes of the letters). With a very charming almost fading “leg” on the R, this version was used through out the years but it first appears on the first TC record publication.

I also found in the archives a seal from 1904, which we can correlate aesthetically to the welded TCs in the stairwell at Russell Hall. The stairs are probably dated from 1924, when the building was built. 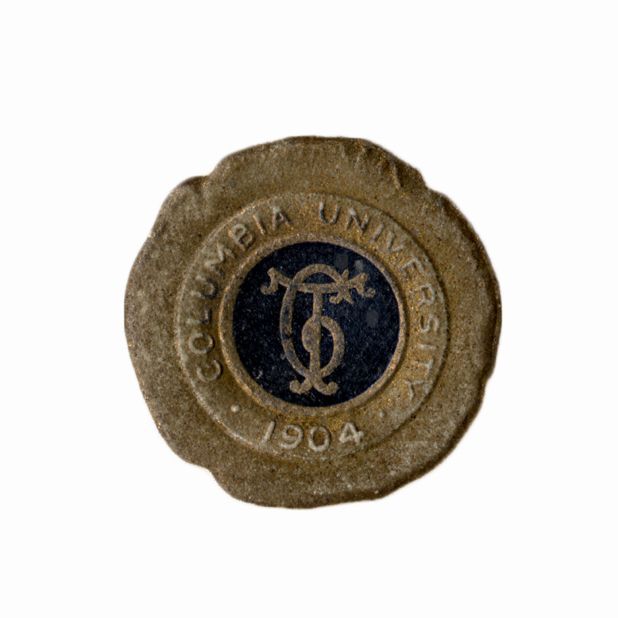 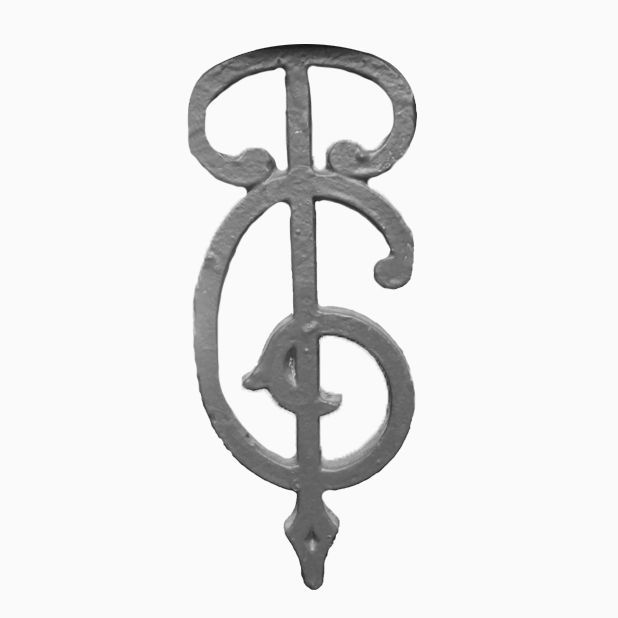 After that, we go into a gap of 30 years without any sort of big change in TC identity. On letter heads, bulletins and TCRs we can see how the name of the college is written with no specific way but still, they serve as evidence of typography evolution itself: the Gothic calligraphy gets new variations in serif and sans serif modern typography, as seen bellow.

In 1955, in celebration of the 125th anniversary of Teachers College, the school gets a new insignia inspired on King’s College and its connection to Columbia. You can find documents from this year until the 90s with this insignia in the college’s official blue, and its declinations with a celebratory text inside the frame, without the fame, in white, and even inside new stablished typographies for the university’s visual communication. 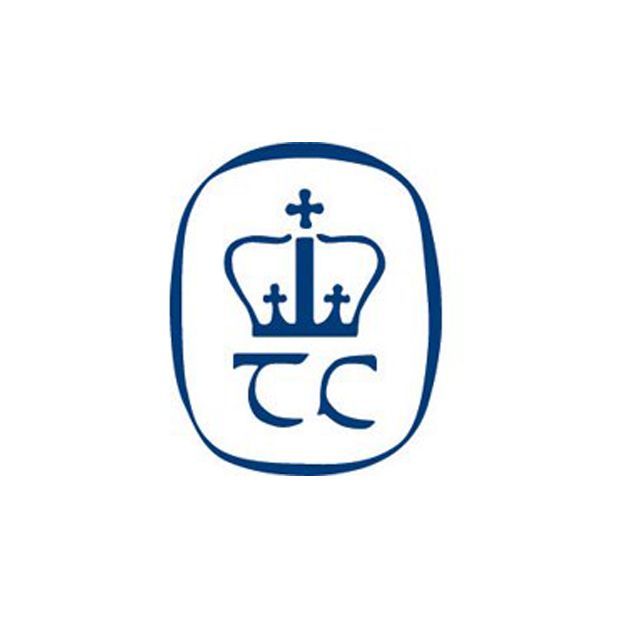 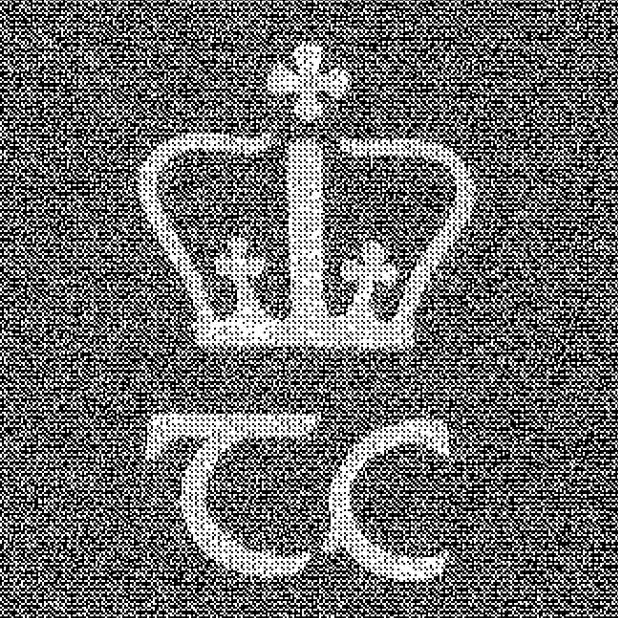 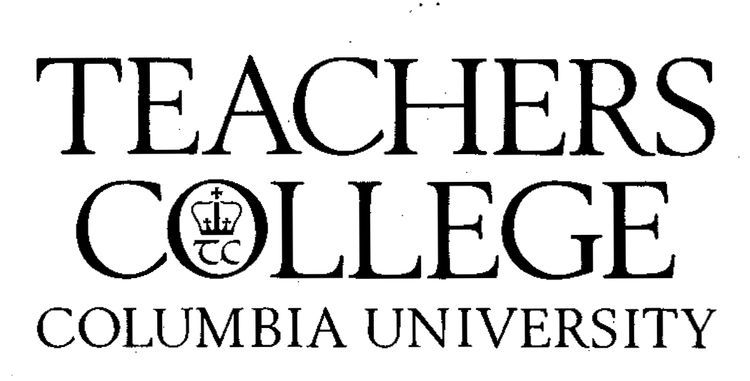 The former version of TC’s identity is extremely used from 1986 to 1991. After 1991 a new arrangement of the visual identity shows up, playing around with the size, kerning (spacing between letters) which seems to represent the importance and hierarchy of the institutions that is representing, and being used for the following three years.

​In 1998 TC’s catalog takes a different direction with a very modn sans serif typography, in black and purple, and variations playing with the capitalization of the word. 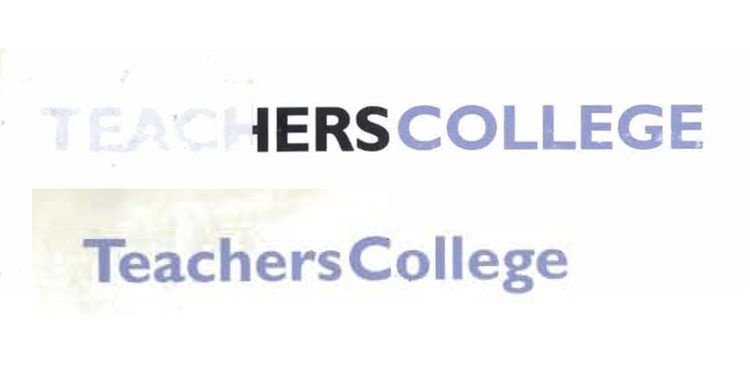 TC logo changes again in 1999 and this is the beginning an exploration that l believe to have lead to the current logo we have. It’s the first time we see a combination of modern serif (Garamond) and sans serif (Gill Sans Regular & Bold) typographies, and color variations.

These variations are used in TC catalog until 2003 when a serif-ed TC strikes back. The 2000s definitely mark a color exploration, so every catalog has a key color associated with the written Teachers College on the cover. 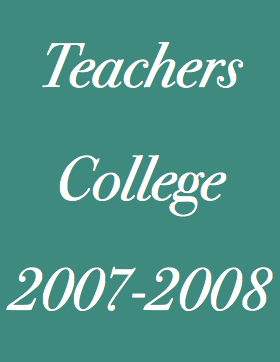 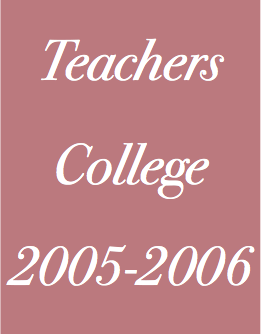 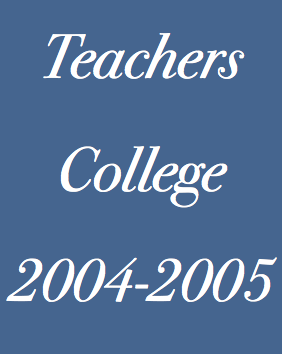 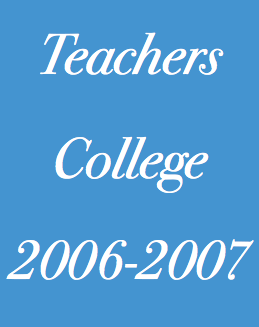 Then, in 2008 we finally get a new visual identity, which it’s still our current official identity. Looking back, we can see it is a more contemporary product of the 90s and 2000s visual communication used by the college.

​
Overwhelmed by the amount of files I’ve been searching visual evidence of evolution (and also understanding my time constrains to dedicate to this search), I walked around TC one more time to be sure I didn’t miss anything. I realized then there was one insignia totally different from all the rest that the school has been using. You can find it in the recycling garbage cans and in the entrance on Amsterdam Avenue. 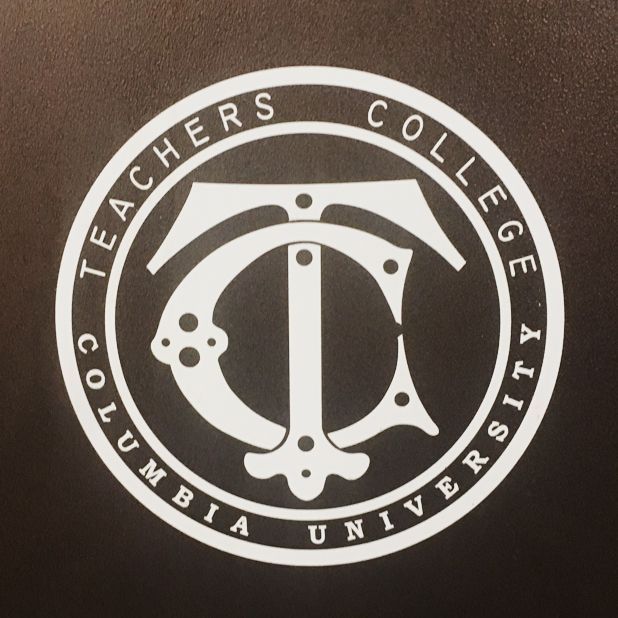 Brian solved the mystery here, telling me that the college’s office was getting new garbage bins in the 2000s and decided to design a new logo. It’s interesting to see how it tries to combine a lot of characteristics from past & present visual communication elements, but it definitely clashes with what came before it.

On the library perspective, I couldn’t find much evidence except the stamps on the back of the books. It showed however the evolution of its name, from simply TC library, to Milbank and finally Gottesman. Through the Web Archive 's Wayback machine, I looked at the library’s website older versions to see how specifically its visual identity have evolved since the website's launch in 2006 and it has been mostly the same except a typography update in 2010.

I stopped my search and I started to put together a exquisite corpse kind of timeline, showing the evolution of TC’s visual identity.  As my initial hypothesis failed, I feel a bit at lost when trying to make a linear evolution of it. Looking at this imagery collection, I tried to understand what are the values present in them throughout the years.

It’s clear to see that Teachers College has a huge importance in how educational experiences has been molded beyond New York. It’s a traditional institution that is actively looking for innovation, not only as a way of keeping up with the times but also as a reflection of the diverse community – and the exchanges that happen within it.

On the light of a new library website, what are the values that a potential new logo should incorporate? Can a logo represent not only tradition, education, innovation, but also values such as diversity, equity and accessibility? I’d love to hear from you what you think are the essential Teachers College values are and how they create possibilities for a potential new library visual identity.